Advisors to the Elite in the Business of Luxury.
En
En
© RE Luxe Leaders, LLC
Insights

Breaking Down the Recruiting Pipeline

This article shares the five steps to breaking down the recruiting pipeline. Inman News published the article by Chris Pollinger. 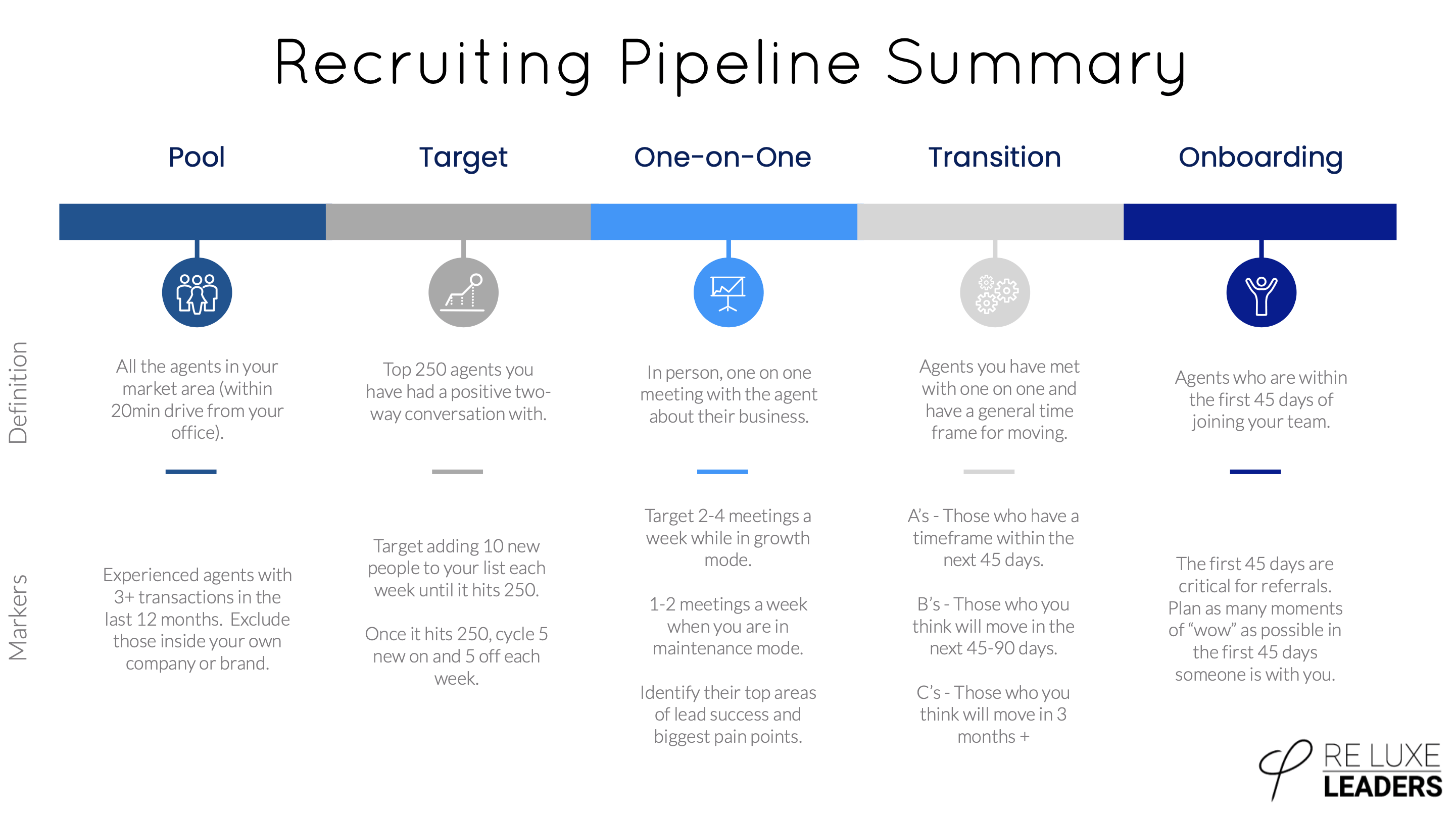 Recruiting is the single biggest factor in building a great brokerage. It also happens to be the single activity most leaders avoid like the plague. Brokers tend to over-think recruiting. This makes it scary and daunting.

As markets shift and costs rise, you can either cut expenses or you can grow. Once you cover your baseline, your profit compounds with growth. This area is too important to try and outsource.

To simplify it, let’s break it into five funnel points. You can then gamify recruiting by trying to see who you can move from one funnel point to the next.

Recruiting Pipeline Metric One – The Pool

Let’s define the recruitable pool as all the agents within your market area. For those with brick and mortar, that is the agents within a 20 minute drive of the office. In major metros, this may be measured in blocks not miles. Of course take out those who are already affiliated with your organization.

The marker for this recruiting metric is the pool of experienced agents. Those with three or more transactions in the last twelve months. Less than that, you will get population numbers without profitability. Low producers hurt your brand. They take up a disproportionate amount of the staff’s time. They also aren’t doing enough business to be serving the client to today’s standards.

Let’s define your target as the agents you have had a positive conversation with. Conversation is two-way. It can be simple, like a quick exchange on a social media post. Or elaborate, like a lengthy conversation at a broker open. Don’t over think this. The goal is to take these conversations out of the “cold” category. Warm follow up makes the phone lighter. Cold calls tend to make the phone weigh ten thousand pounds.

The marker for this recruiting metric is to add ten new people to your list each week until it hits 250. Once it hits 250, cycle five new on and 5 off each week. This will give you a churn rate to be able to grow . Momentum is your friend. Consistency is the most important factor for success.

To define this funnel point, those whom you have had a one on one business meeting. These are not recruiting appointments. They are not for you to present your pitch deck. It is about them and their business. You want to find out where their strengths are. You also want to identify their pain points. Filter out those who aren’t a good cultural fit for your organization.

The process that has worked like magic for me over the years has three points. The first time I met someone I’d say “It was nice to meet you.” The second time, “It was great to see you again.” The third, “We keep running into one another. We should grab a cup of coffee. I’d love to learn more about you and your business.”

This industry is small when you look at the people who are doing most of the transactions. Agents don’t move due to your compelling argument. Any more than your agents can convince someone who isn’t thinking about selling to list their house. Agents move when the frustration with where they are now hits a tipping point.

After your meeting, you will have a general sense of when you think the agent would be open to moving. Categorize them in your pipeline with these criteria:

To define this funnel point, these are the agents who have joined within the last 45 days. The first 45 days are critical for referrals. Plan as many moments of “wow” as possible in this period.

I can’t stress enough how important a great onboarding experience is. You should be getting three to five organic referrals in the first six weeks. These are referrals you aren’t asking for. They are a natural expression of genuine appreciation. This adds jet fuel to your growth momentum.

Office population includes both recruiting and retaining. They go hand in hand. Being out of balance on either side is problematic. As well as very, very expensive. If you need any tools to help you on either side, please reach out.